Football finance expert and AC Milan fan Felice Raimondo has published a thread on Twitter which casts severe doubt on the idea that Milan have a fixed budget for the summer which is low.

Daniele Longo of Calciomercato.com reported that the proposed budget for the summer mercato from Gerry Cardinale and RedBird Capital – excluding the loan with options to buy and any possible sales – is €45-50m.

This is one of the reasons for the slowdown in recent weeks over the extensions of the directors’ contracts because they feel €45m is not enough complete the squad. An agreement will be found because Maldini wants to stay, but he is ‘not happy’ with the situation as per Longo.

Raimondo wanted to set the record straight on what the actual situation is and essentially explained that it is very unlikely there is a fixed amount available for new signings purely because of the amount of fluid situations and moving parts there are, plus a lack of knowledge about the target for the 2022-23 budget.

“To definitively deny this insane way of commenting on the transfer market, we must start from a promise: the clubs do not think like housewives who go shopping. In the financial statements of the clubs we think about the income statement and balance sheet,” his thread begins.

“So there are two sides of the same coin and each club can have needs on one or both of these sides. Economic Management (EC) photographs the situation of a club at a given historical moment. Revenues and costs can lead to a deficit or a profit. 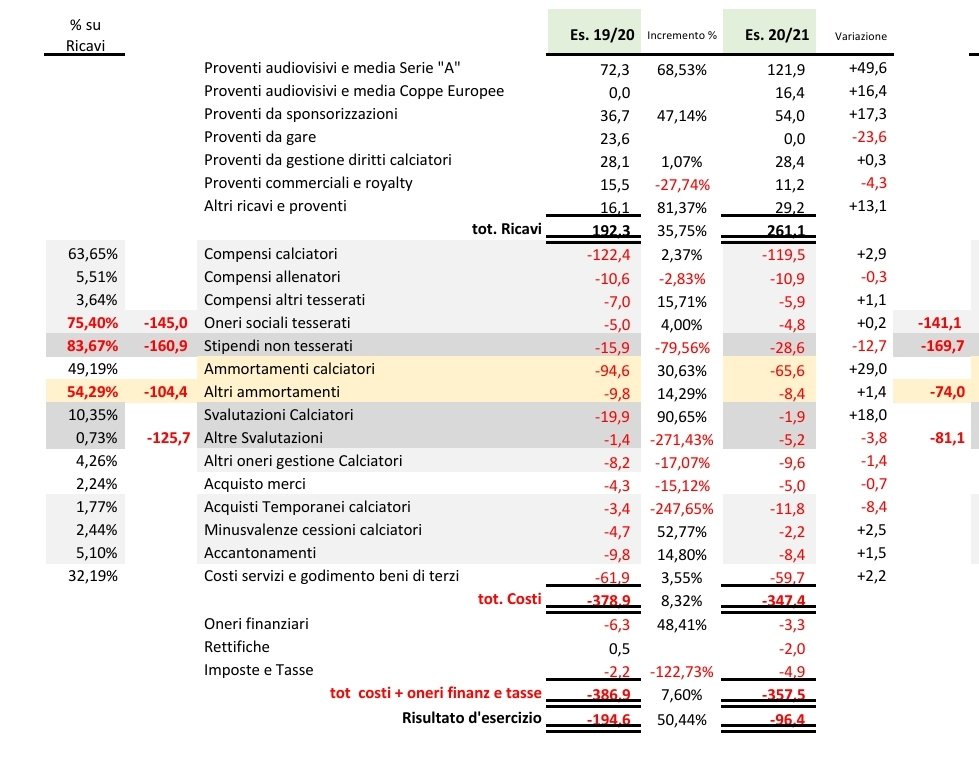 “If the players’ wages were stable between one financial year and the next, depreciation (i.e. the outstanding costs of transfer fees) as of 30-6-21 even dropped by €30m. Overall costs decreased by a similar amount (from €387m to €357m).

“Based on the data released by the media (fees and salaries), Milan’s 2020-22 market should have ended with a substantial balance for depreciation and salaries and a general tendency to save. As you can see, the factors that affect a ‘mercato’ are many.

“Gross salaries, depreciation, write-downs and loans. All of this contributes to creating expenses for the players. You understand, therefore, that talking about treasury or budget is impossible except in the terms mentioned above.

“Budget is linked to several factors and, above all, is valued considering the deviations from previous years. So having more availability in depreciation / wages can lead to a greater margin for purchases but this margin can never be quantified in a fixed amount.

“The amount, in fact, for what has been said can only be fluid, therefore not predetermined. But not only that: the margin can also vary due to greater availability that is produced along the way (new sponsors, capital gains, etc.).

“The other side of the coin: cash flows and therefore the club’s ability to collect money. For example, the instalments in the payments of the players refer to this. There are clubs that may have a greater need to generate cash than other clubs.

“AC Milan have never had cash problems up to now, also because the shareholder has never lacked their support. The Rossoneri club, if anything, had to deal with an economic management characterised by a large deficit between costs and revenues.

“That said, a greater or lesser budget on the market depends on so many factors that talking about a budget is simply insane. Clearly, availability is influenced not only by own sources (i.e. the club’s revenues) but also by the ability of the owner to allow the club to run a larger deficit.

“We are talking about capital increases/shareholder loans which, beware, are not used to make the transfer market but to allow the club to be able to make up for larger deficits in turn also caused by expenses on the players.

“Moreover, by now the capital increases ‘in view of’ the market have lost value because UEFA tolerates capital injections only within certain limits (also in the new FFP) by demanding that the club spend only a certain amount in relation to revenues for the players (squad cost rule).

“As for Milan, a few days ago I hypothesised some room for manoeuvre on the basis of lower depreciation and therefore from a self-financing perspective, clearly a partial forecast of a picture known only by the club in its entirety.

“Based on that forecast, with a view to self-financing, if we prudently consider contracts for 4 years (and not 5), the potential margin ranges from a minimum of €60m to a maximum of €120m. This is because we will be able to reinvest between €15m and €30m in depreciation.

“However, none of us are able to say the real room for manoeuvre on the 2022-23 market, so how much we will be able to invest in spending on players. This is because none of us know the trends in our balance sheet as of today and the possible end goal of the 22/23 year.

“In fact, the margin on the market will necessarily be influenced by the operating result that the company expects to obtain as of 30/6/23, the ability of the club to increase revenues and the possibility of the shareholder to write off X rather than Y. We know none of that.

“The only conceivable thing is that if there is a certain margin on amortisation that can be deduced from those who have expired and from those who can leave, on salaries (figures known individually only to the club) it will be complicated to remain stable due to the Scudetto bonuses, renewals and new purchases.

“Ergo it is likely that the expenses for the players in the 22/23 increase compared to the 21/22 financial year. If we want to stay in balance it is necessary that revenues increase as if not more than expenses. As already mentioned, the club’s ability to generate new revenue will be crucial.

“In that way, self-financing can be more ambitious because the margin and therefore the deviation from the previous year can be greater. Reducing all this to a simple ‘we have €50m to spend’ makes you smile to put it mildly.

“For this reason I suggest everyone to postpone when you read about various budgets. The real spending power is known only by the club and, as you understand, is based on much more complex and variable calculations. Enjoy the summer and we hope that Milan will come out reinforced.”

Warehousing And Storage Global Market Opportunities And Strategies To 2030: COVID-19 Impact And Recovery

US Retailers Facing a Potential Wave of Bankruptcies

Crypto and Defi Could Pose ‘Real Risks’ to Financial Stability –…

The Marriott Bonvoy Brilliant Card is offering a $300 dining credit

Jim Cramer’s famous words suggest you can make money no matter what. Here are 2…

Suze Orman has a warning for those quitting amid Great Resignation

Jun 25, 2022
Bear markets have grown almost routine for Bitcoin and other cryptocurrency prices. Since its 2009 launch,…

Jun 24, 2022
In an unusual move, federal energy regulators have launched a probe of New England’s electric grid operator over…
Prev Next 1 of 2,263